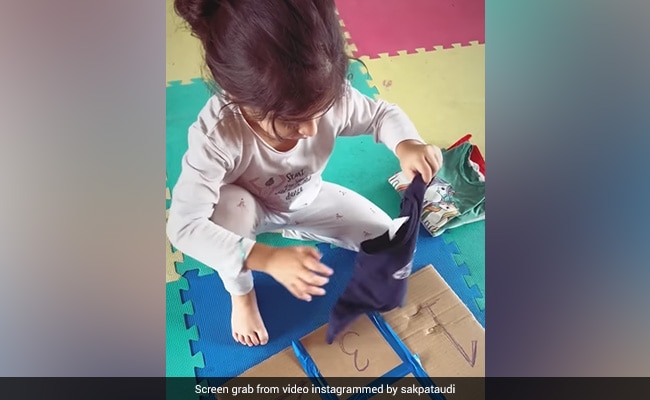 Just like every other household, Saturday mornings in Soha Ali Khan‘s house are dedicated to completing chores. The actress mentions that everyone pitches in for the work. And if you don’t believe it, she has proof. Soha has shared a video of her daughter doing her bit of the housework. In case you don’t know how to fold clothes, take tutorials from Soha Ali Khan’s daughter, Inaaya Naumi Kemmu. The little one has an easy trick to neatly folding her clothes. In the video, we can see small cardboard with three flaps, each sporting a number – 1,2,3. Inaaya places a T-shirt on it, and one after the other, following the numerical sequence, turns the cardboard flaps inside. Result? A neatly folded T-shirt. ”Saturday mornings are for chores – and we all pitch in,” Soha captioned the video along with two hashtags reading, “weekend” and “chores for kids.”

Not only us but Shweta Bachchan is also gushing over Inaaya’s cute attempt. “Oh my cuteness,” she wrote in the comment section. Soha Ali Khan’s sister Saba Pataudi also commented on the post saying, “Wow, clever girl.”

Soha Ali Khan’s weekend updates always have a touch of Inaaya’s cuteness. On another weekend, the actress gave us a sneak peek into her “Weekending part 2.” In the photograph, she is seen reading a book to her daughter Inaaya, who is sitting right next to her and listening with rapt attention.

The actress often shares heart-melting pictures with her daughter and we cannot have enough. In this set of beautiful pictures, the mother-daughter duo is twinning in white ethnic outfits. Their candid shots left the Internet in awe. The images showcase Soha sitting on a carpet of flower petals. Don’t miss the picture of them giving each other a super cute kiss.

Soha Ali Khan and Kunal Kemmu tied the knot in 2015. Two years later in September 2017, they became parents to a baby girl, Inaaya.