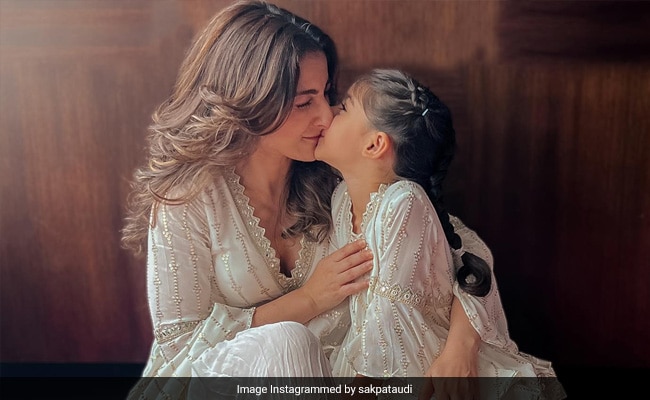 Bollywood actress Soha Ali Khan shared beautiful pictures with her daughter Inaaya Naumi Kemmu recently. Twinning in white ethnic outfits, the two posed for wonderful candid shots that have left the Internet in awe. The string of images, shared by Soha on her Instagram, features the Tum Mile actress sitting on a carpet of flower petals and wearing a pretty sharara set in white and gold. Inaaya, 4, dressed in a similar outfit, playfully throws petals on Soha. Another shot featured them giving each other a super cute kiss.

In the caption, Soha simply dropped a white heart emoji. Soha had earlier shared a fun behind-the-scenes moment with Inaaya from the photoshoot on Eid to wish fans “Eid Mubarak.” She wrote, “Wishing you all a shower of blessings and love this Eid.” Soha’s sister Saba Ali Khan commented on the post and wrote, “Mahshallah…My jaan!”

Take a look at Soha’s posts below:

Soha often shared pictures with her daughter, mostly twinning with her in matching outfits. Last week, the actress wore a blue cap and posed for the camera while Inaaya posed in a dress with a pink cap. Soha captioned the image: “Aren’t we just cap-tivating?”

Last month, the Kemmu family was in London to snatch some family time in the summer. Soha and Kunal Kemmu took Inaaya to a theme park, called Peppa Pig World. Sharing pictures on Instagram, Soha wrote, “Somewhere over the rainbow, this happened,” and added the hashtags “London” and “Peppa Pig World.”

On the work front, Soha Ali Khan last featured in the film Saheb, Biwi Aur Gangster 3 in 2018. She recently starred in the web series, Kaun Banegi Shikharwati. The actress has previously authored books like The Perils of Being Moderately Famous, and Inni and Bobo Find Each Other: Inni and Bobo Adventures (Book 1) in collaboration with husband Kunal Kemmu.