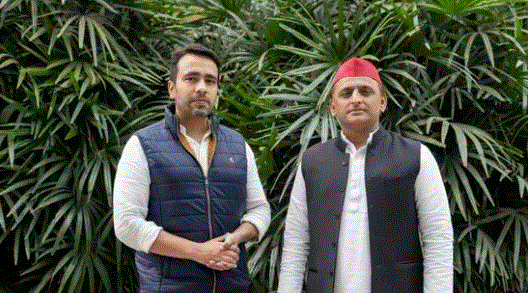 Lucknow: The 55 Assembly seats going to polls in the second phase of elections in Uttar Pradesh is very crucial for the SP-RLD alliance as it is hoping to gain in the region from the long farmers` agitations. The ruling BJP is said to be facing a stiff challenge from the Samajwadi Party-Rashtriya Lok Dal alliance in the sugarcane bowl of the state.

Of the 55 assembly constituencies, the BJP had won 38 in 2017, Samajwadi Party had bagged 13 and the Congress and Bahujan Samaj Party (BSP) had won two seats each. The SP and the Congress had contested the 2017 Assembly elections in a pre-poll alliance, but the BJP had swept the polls.

Areas going to the polls in the second phase have a sizeable Muslim population, who are known to be influenced by religious leaders of the Barelvi and Deoband. The Samajwadi Party reportedly has a larger following among the Muslim electorate in the region.

Deoband, Rampur, Maniharan, and Gangoh constituencies in Saharanpur and Sambhal and Asmoli in Sambhal are some of the keenly watched out electoral battlegrounds in the second phase of the elections.

Among the prominent faces whose fate will be sealed in this phase of elections are Samajwadi Party leader Mohammad Azam Khan from Rampur, the BJP leader, Uttar Pradesh Finance Minister Suresh Khanna from Shahjahanpur, Jal Shakti state minister, and BJP leader Baldev Singh Aulakh from the Bilaspur constituency.

Azam Khan`s son Abdullah Azam is also contesting from the Swar seat. He is up against former Congress party member Haider Ali Khan, who has been fielded by Apna Dal Sonelal, a BJP ally.

Uttar Pradesh Finance Minister Suresh Khanna is in the fray from the Nakud Assembly segment. Other key candidates in the fray are the Minister of State for Urban Development Mahesh Chandra Gupta from Badaun, and the Minister of State for Secondary Education Gulab Devi from Chandausi. Former Mayor of Bareilly Supriya Aron is contesting from Bareilly Cantonment on the Samajwadi Party symbol.

In its manifesto, Samajwadi Party has promised to make all farmers debt-free within four years if it comes to power in the state. Congress has promised to procure wheat and paddy at Rs 2,500 per quintal while timely payment of sugarcane farmers would also be done.

The BJP, however, said it is working for a permanent solution for sugarcane farmers of Uttar Pradesh, thereby benefitting from ethanol blending in petrol and diesel.

As many as 586 candidates are in the fray for the 55-member Assembly seats in the second phase, with two crore voters.

Notably, the BJP, Samajwadi Party, Congress, and the BSP have campaigned aggressively in this phase of the elections.