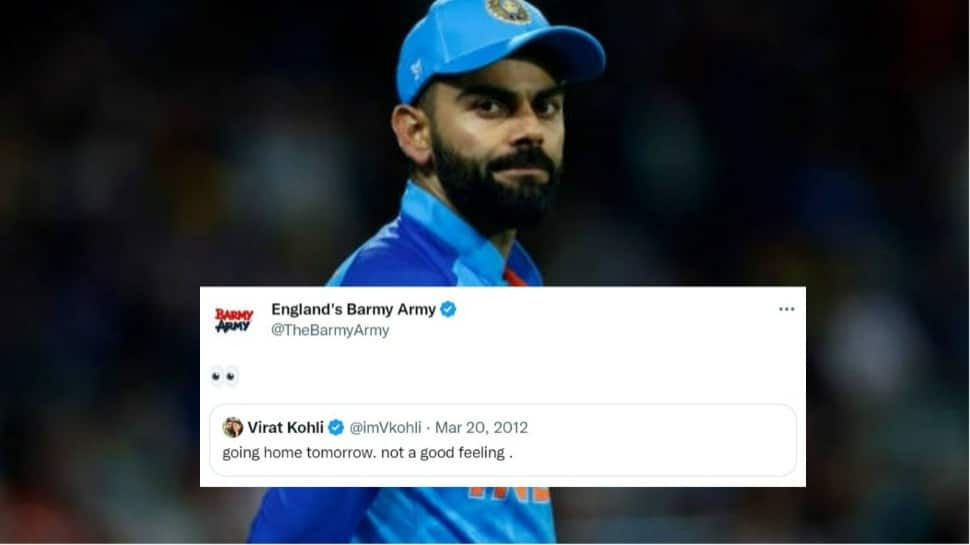 T20 World Cup 2022: India’s dream of becoming the T20 Champions of the world were slammed by England in the second semifinal of the tournament on Thursday (November 10) as openers Jos Buttler and Alex Hales were in a different zone at the Adelaide Oval. Former India captain Virat Kohli helped his side with a score of 50 off 40 balls to post 168 on the board batting first but the Men in Blue bowling attack had no answer to

the opening pair of Buttler and Hales.


After the loss, Team India were brutually trolled after they were taught a ‘lesson’ by the Three Lions and England’s Barmy Army were among the many who trolled the Men in Blue after their humiliating 10-wicket defeat. (Pakistan PM trolls Team India, check HERE)

The Barmy Army Twitter handle pulled up an old tweet of star batter Virat Kohli from 2012 which read, “Going home tomorrow. Not a good feeling.”

After the disappointing end to their World Cup campaign, Virat Kohli penned down an emotional note for the fans. In this letter to the fans, Kohli wrote that the team is hurting and disappointed after the loss to England in the semifinals.

“We leave Australian shores short of achieving our dream and with disappointment in our hearts but we can take back a lot of memorable moments as a group and aim to get better from here on. Thank you to all our fans who turned up in huge numbers throughout to support us in the stadiums. Always feel proud to wear this jersey and represent our country,” wrote Kohli on his Twitter. (‘Hurtful loss’: KL Rahul, Suryakumar Yadav’s first reactions after CRUEL knock out loss vs ENG in semis, check here)


In the post-match conference, Team India head coach Rahul Dravid faced the media and was questioned on the future of Rohit and Virat. Rahul said that this was not the right time to reflect on the future of these senior players and that they still had some cricket left in them.