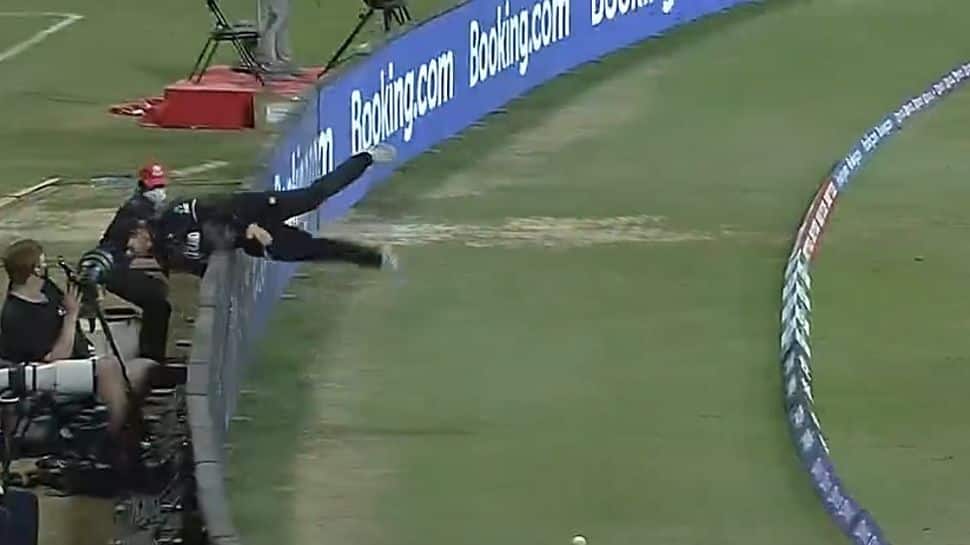 New Zealand player Glenn Phillips was lucky to escape an injury when he collided with the advertising board during the first semi-final between England and New Zealand in Abhu Dhabi on Wednesday (10 November).

Dawid Malan, who was middling everything on Wednesday, struck one lovely cover drive and the ball was racing at bullet speed to the extra cover boundary when Glenn Phillips came running in from square of the wicket to stop the boundary.

He was literally sprinting to reach the ball and stop it through a dive. However, he could not do that as the pace of the ball beat him. But what followed next was an ugly accident as Phillips could not stop himself even after crossing the ropes and ended up hitting the advertising board kept right across the boundary ropes. He hit the board before crossing it. And that was not a pretty sight.

It appeared, at the first sight, that Phillips could be massively injured. But to the good fortune of New Zealand, he escaped unhurt from that collision. He quickly got up, took the ball and threw it back to the bowler.

This could have been nasty for Glenn Phillips #ENGvNZ pic.twitter.com/Bvzk15ESOk

Phillips is rated as the most fit player in the New Zealand ranks. No wonder the 24-year-old returned unhurt after that big collision near the ropes.

Later, he came back to bowl as well, proving his fitness levels to all who saw that accident live.