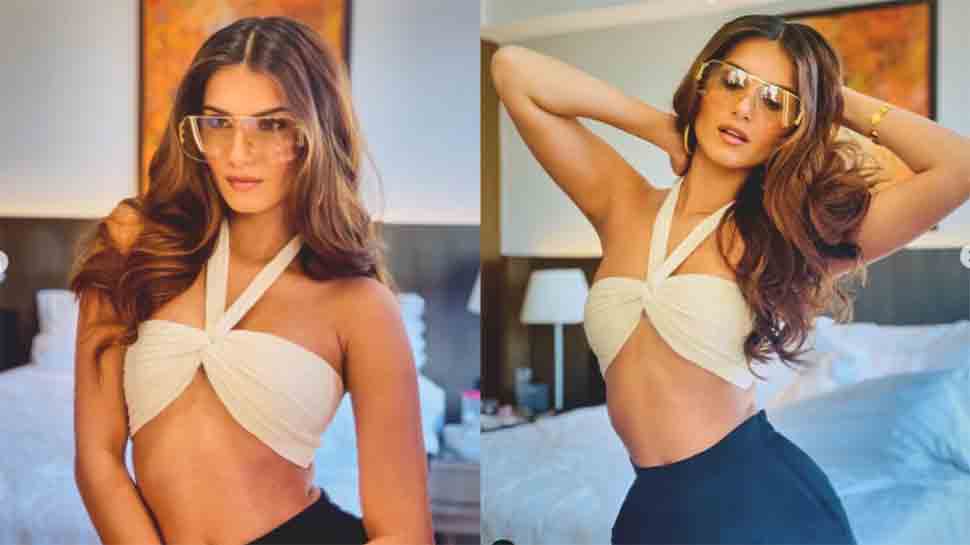 NEW DELHI: Actress Tara Sutaria may only be a few films old in the entertainment industry, but she is a certified glam star and often raises the hotness quotient with her sultry-glamorous pictures. The actress, who has been busy promoting her upcoming film ‘Tadap’, shared some smouldering pictures of herself from the film promotion.

Tara is seen posing in a halter white crop top which she wore with black bottoms. She showcased her curvaceous physique in white co-ords and looked drop-dead gorgeous as ever. Also, you cannot miss the oversized glasses that frame her face perfectly. Dropping the stunning photos, the star wrote in the caption, “Yesterday,” with the hashtag “Tadap Day 6”.

Her fans and followers lined up in the comments section to tell her just how stunning she looked in the pictures.

Barely a few days ago, Tara shared another look from her film promotion on social media. However, this time, she attracted eyeballs because of her pose in one of the photos. Her ‘Ek Villain Returns’ co-star Arjun Kapoor also reacted to the photo and wrote, “Rather odd place to pass out you have chosen…” To this, Tara Sutaria replied, “You know me… always ready to nap.”

Speaking of ‘Tadap’, Tara Sutaria will be sharing screen space with Ahan Shetty. Ahan is the son of actor Suniel Shetty and is making his debut with the film. ‘Tadap’ is directed by Milan Luthria and is the official remake of the Telugu film ‘RX 100’ that was released in 2018. RX 100, which starred Kartikeya Gummakonda and Payal Rajput. The film will arrive in theatres on December 3.