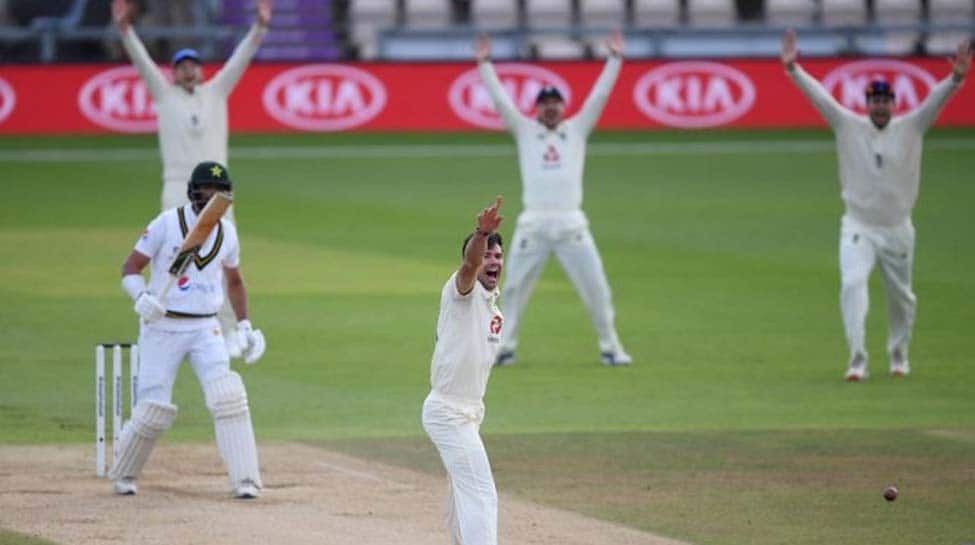 Pakistan were reduced 24 for three in their first-innings against England at stumps on the second day of the series-deciding third and final Test at the Rose Bowl Cricket Ground in Southampton on Saturday.

At the end of the second day’s play, the visitors were still trailing England by 559 runs in their first-innings, with skipper Azhar Ali (four) batting at the crease.

Earlier, Zak Crawley pulled back a double century, while Jos Buttler smashed his second Test ton to help England post a mammoth total of 583 for eight declared in their first-innings.

Resuming the day at Friday’s score of 332 for four, Crawley not only hammered a blistering knock of 267 runs but also stitched a huge partnership of 359 runs with Jos Buttler for the fifth wicket.

While Crawley smashed 34 boundaries and a six in his 393-ball knock, Buttle notched up 13 fours and two maximums in his career-best innings of 152 runs.

After the duo’s departure, Chris Woakes also made a significant contribution of 54-ball 40 before being caught by Yasir Shah at cover off a Fawad Alam delivery in the 149th over.

Subsequently, Stuart Broad fell for 15 after being bowled out by Shaheen Shah Afridi, while Dom Bess remained unbeaten at 27 when the hosts declared their innings.

For Pakistan, Shaheen Afridi, Yasir Shah and Fawad Alam bagged two wickets each, while Naseem Shah and Asad Shafiq chipped in with a wicket each for their side.

On the opening day, Zak Crawley (171) smashed his maiden Test ton besides stitching a partnership of 205 runs with Jos Buttler (87) to put England in driver’s seat at stumps.