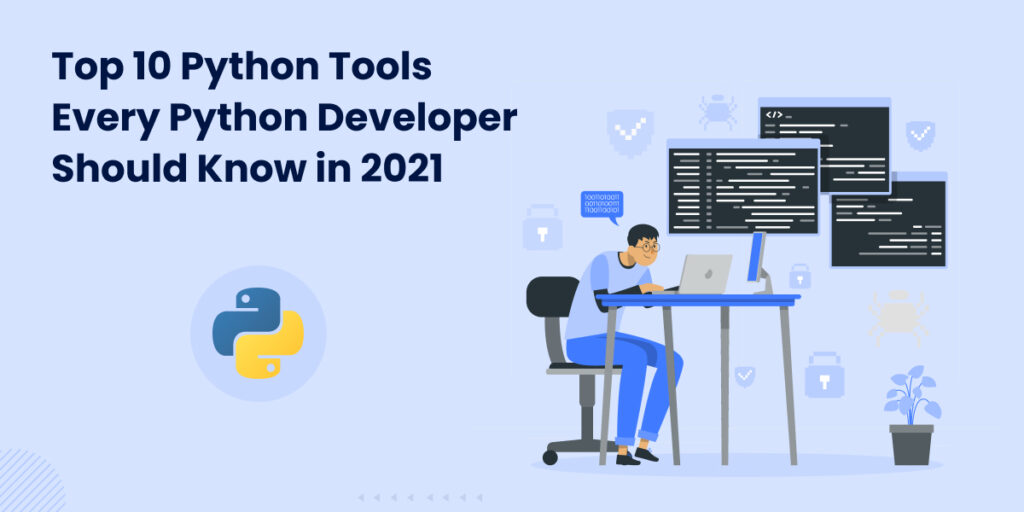 Python has also become the go-to language for building machine learning as well as web applications. In this article, we would discuss various tools that every Python developer should know in order to succeed in their career.

Scikit is the most sought library which is used for building machine learning applications. Almost every AI/ML developer uses scikit along with NumPy and SciPy for analyzing the data and deriving important information out of it.

Scikit comes with very simple APIs which you can use to preprocess your data, divide your data in a test and train training set, run your defined model, and then analyze the results in graphical mode. You can run classification, regression, and clustering models on your data to derive meaningful information out of it.

In recent times, there has been a lot of craze about self-driving cars, and most people are convinced that deep learning is the way to go forward. Keras is a full-fledged library that can help you create your deep learning network within seconds.

Keras provides you with simple functions using which you can build your convolutional neural networks. It also allows you to provide it with a set of images on which it will learn and provide you with the right classification. Keras also allows you to fetch various datasets such as MNist and ImageNet.

Python comes with multiple web application development, but Flask and Django are the ones that are mostly used by developers to build web applications.

Flask is a lightweight web application development tool that provides you with minimal built-in libraries but allows you to add a library externally. Flask gives developers the freedom to choose the library of their wish.

Flask is pretty simple and pythonic in nature. You can easily set up the complete infrastructure within minutes. It requires you to write a minimum boilerplate to get started and is very good for beginners to start building basic web applications.

If Flask is a hammer, then Django is a complete toolbox. Django is a full-fledged web application development framework that has everything bundled in it. It is difficult to get started with Django but once you start getting with it, it is very easy to build web applications as most of the tools are already bundled in the framework.

Selenium is one of the best automation tools currently available in Python. You can easily test any web application and generate reports. Selenium is an open-source tool and provides you with the flexibility to write your script in any language such as Java, C#, Perl, and Python.

Selenium is browser agnostic which means the same tests can be run on Mozilla Firefox, Google Chrome as well as Internet Explorer.  Selenium is also platform agnostic and you can run the same code on Windows, Linux as well as Mac operating systems.

Scrappy is a high-level framework that you can use to perform web crawling, data mining, and well automation testing. Scrapy is also platform agnostic and can run on Windows, Linux as well as Mac operating systems.

BeautifulSoup is another famous web scraping tool used by developers to extract important information about the website. One simple example of web scraping is fetching weather forecasts from a government website and displaying that data on your website.

BeautifulSoup can be used to navigate the incoming parser tree, dissect it to collect data, and modify the tree if you want. And all of these can be done by adding just a few lines of code. It can parse both XML as well as HTML documents.

Pip is used to install various Python packages and is the most important tool for any developer. Before accessing any package, a user must install that package and it can be done by just executing the command “pip install <package-name>”.

Anaconda is the most common tool used for package management as well as environmental management. It also comes bundled with various tools such as NumPy, SciPy, sci kit-learn, and pandas. You can easily add new packages using pip or conda.

Anaconda manages the right version of packages for you and installs the compatible versions, so that you are freed from package management. You can also easily switch between python 2 and python 3 using Anaconda.

PyCharm is the most used IDE to write python code. It has both a community edition which is free of cost as well as a full-fledged premium edition. It can help you a lot by auto-completing code which can reduce your code development time.

It also allows you to navigate through various functions within the code and also help you to debug your code. You can easily integrate Anaconda with PyCharm where you write your code in PyCharm and execute the code on Anaconda.

Python is becoming bigger every day and now is the right time to launch yourself in it and learn all these tools. Every day a new python tool comes, hence it is really important to keep yourself updated with the latest technology trends and latest packages available in Python.

In this article, we have discussed the most used python tools in various fields. We tried to cover the most important tools in fields such as machine learning, web application development, and web scraping. Hopefully, you get your hands dirty with these tools.