As the National Investigative Agency (NIA) gets custody of the accused in two murder cases being linked to the Nupur Sharma incident—the brutal killing of a tailor in Udaipur in Rajasthan on June 28 and the earlier murder of a pharmacist in Amravati in Maharashtra—it faces significant challenges. The main task for the investigators is to discover whether any more related attacks have been planned. “We know that handlers in Pakistan of the two accused in the Kanhaiya Lal Teli murder in Udaipur did instigate them to do something big,” says a senior officer, adding that it was too early to attribute any cross-border connection to Umesh Kolhe’s killing in Amravati. What worries anti-terrorism agencies in India is whether external forces are plotting a new form of terror, getting extremist Islamists to target those guilty of ‘blasphemy’.

As the National Investigative Agency (NIA) gets custody of the accused in two murder cases being linked to the Nupur Sharma incident—the brutal killing of a tailor in Udaipur in Rajasthan on June 28 and the earlier murder of a pharmacist in Amravati in Maharashtra—it faces significant challenges. The main task for the investigators is to discover whether any more related attacks have been planned. “We know that handlers in Pakistan of the two accused in the Kanhaiya Lal Teli murder in Udaipur did instigate them to do something big,” says a senior officer, adding that it was too early to attribute any cross-border connection to Umesh Kolhe’s killing in Amravati. What worries anti-terrorism agencies in India is whether external forces are plotting a new form of terror, getting extremist Islamists to target those guilty of ‘blasphemy’.

A week after two middle-aged Muslims killed a Hindu tailor in the walled city of Udaipur, recording the crime on videos that inevitably went viral, curfew has been relaxed and the city is returning to normal. The internet ban imposed in most parts of the state has also been lifted (Rajasthan ranks second after Jammu and Kashmir in disrupting web services to maintain law and order). The NIA court in Jaipur sent the two main accused to 10-day police remand on July 2; the central agency has also taken more suspects into custody including those alleged to have been in the know about the plot. Across the state, the police has been booking and arresting people from both communities for circulating videos of Sharma or the murder to instigate violence. Describing the killers, Gaus Moh­ammad and Mohammad Riyaz, an officer who interrogated the two told india today: “They had no remorse whatsoever for their actions.”

The central brief of the NIA inves­tigation and the anti-terrorism squad (ATS) of Rajasthan is to look for clues about whether the two were part of a larger conspiracy to create communal disharmony and how intell­igence agencies at the Centre and the state missed out on flagging someone like Gaus Mohammad, who had visited Pakistan for 45 days in 2014 on a visa arranged from that country. Gaus has been to Nepal too and had also gone to Saudi Arabia on Haj as had second accused Mohammad Riyaz in 2019. It is suspected that Kohle’s murder in Amravati on June 21 too was motivated by the victim’s reported support on social media for Sharma. The investigators are also looking into why Gaus had visited Pakistan in 2014, and whether anyone funded the two men’s trips abroad, given that both are from low income families. 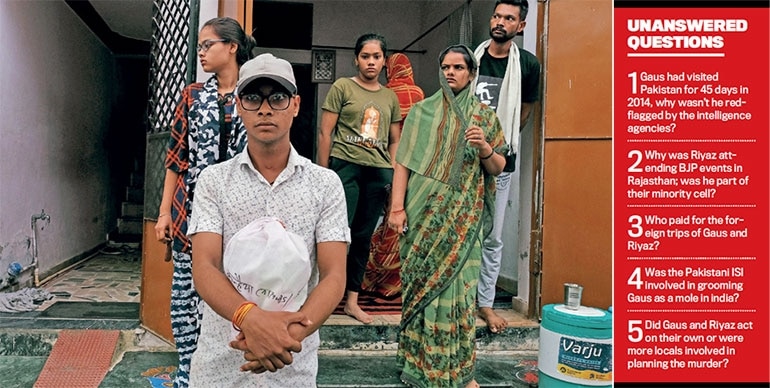 Gaus’s father was a collection agent for the Sahara India finance company and after the firm closed set up a small grocery shop in his home, a few hundred metres from the house where Riyaz had shifted two weeks before the murder. Both houses are within sight of a police post and the adjoining mosque at the historic Kish­anpole Gate. Gaus, a matriculate, was described as well-mannered and made a living by taking online orders for his father’s shop and delivering goods to customers. Riyaz, a near-illiterate steel fabricator, was known to be loud and rough in the locality where he kept shifting houses often after defaulting on the rent. But Iqbal Bhai, who runs a small biryani shop next to Riyaz’s latest residence, says he hardly noticed the man or his wife.

Muslims in Udaipur are not particularly orthodox, and it is unusual to see a woman in a burqa. So here too, there was nothing that stuck out from the ordinary. But inspector general of police, Udaipur range, Praful Kumar says radicalisation has to be looked at more deeply. “The frequency of Gaus’s conversations with his two handlers in Pakistan increased considerably in the two weeks before the murder. Before we handed over the accused to the NIA, we learnt about the two recently being asked to do something big to become the poster boys of the Tehreek-e-Labbaik Pakistan (TLP).” TLP is an extremist Islamist organisation that was earlier banned in Pakistan. The role of social media in instigating the killers is also being looked into.

Investigations so far indicate that on his Pakistan trip Gaus visited the Karachi-based Daawat-e-Islamia non-profit with no terror links and known for its Islamic educational institutions across the world—and was probably recruited as a good contact in India. He has been in active touch with someone from the TLP, and at least one other person in Pakistan, who may have been Gaus’ handlers there. One of them has been identified as a caretaker at the Dawat-e-Islami headquarters and the other one is a preacher. Agencies are ascertaining whether, in the 45 days he spent in Pakistan, he had gone to places other than Karachi (for which he was issued the visa) and if that country’s intelligence agency, the Inter-Services Intelligence (ISI), is complicit in the matter.

Indians going to Pakistan on religious visits is not an unusual thing. By the same token, Indian agencies habitually screen such travellers, though a source in the Intelligence Bureau said it is not possible to scan everyone, especially if the name does not pop up on their radar.

The accused were reportedly told to “do something big” to become the poster boys of the extremist outfit, Tehreek-e-Labbaik Pakistan

But what has sparked a major controversy is the presence of Riyaz at a number of events organised by the BJP and its affiliate organisations as part of its so-called ‘minority cell’.

The Rajasthan Congress has accused the opposition BJP of cultivating such people and then brainwashing them to commit crimes so as to run down the Muslim community. State PCC president Govind Singh Dotasra wrote in a letter to NIA chief Dinkar Gupta on July 5: “Our countrymen are anxious about whether the BJP, in its greed for power, is supporting anti-national activities. I request you to expand the NIA’s investigations to look into the BJP link in both the Udaipur and Kashmir incidents and bring out the truth.” Dotasra was referring to photos of Riyaz with BJP leaders and, in the Kashmir incident, Talib Hussain Shah, an alleged Lashkar-e-Taiba (LeT) commander arrested on July 4 who reportedly headed the BJP’s min­ority morcha and IT cell in Jammu at one point.

The BJP’s Gulab Chand Kataria, leader of the opposition and a former home minister, has asked the police to probe whether his photograph with Riyaz in the backdrop was morphed. The police say they are yet to question Riyaz on why he had been visiting the BJP events but confirm that he used to frequent the place where Kanhaiya Lal ran his tailoring shop to meet friends, which is perhaps how he got to know about Lal’s social media post. Riyaz even sharpened the cleavers used in the killing and made a video on June 17 announcing the planned murder.

Meanwhile, Chief Minister Ashok Gehlot has been quick to take credit for getting the accused arrested within hours and maintaining peace despite the charged atmosphere. Additional forces were mobilised for sensitive areas and protest marches by Hindutva groups and the BJP across the state remained mostly peaceful. The CM also visited the family of Kanhaiya Lal and also met with Ishwari Singh, Lal’s helper at the tailor shop who is recuperating from the injuries he received in the horrific attack.

Gehlot also met Shakti Singh and Prahlad Singh, the two young villagers who, on being alerted by a policeman, chased the escaping Gaus and Riyaz for miles and tipped the police about their location. Amid allegations of police failure, five officers of the Rajasthan Police Services were suspended for not taking Kanhaiya Lal’s pleas about a threat to his life seriously.

The BJP leaders reacted a bit late but on July 4 former chief minister Vasundhara Raje and Union minister Gajendra Singh Shekhawat visited Lal’s family where, predictably, they blamed the Gehlot government for the murder. Meanwhile, the state’s reputation too has taken a hit with huge cancellations of tourists arrivals in Udaipur and Muslims expressing fears that they could be further isolated as Hindu employers shy away from hiring members of the community. n