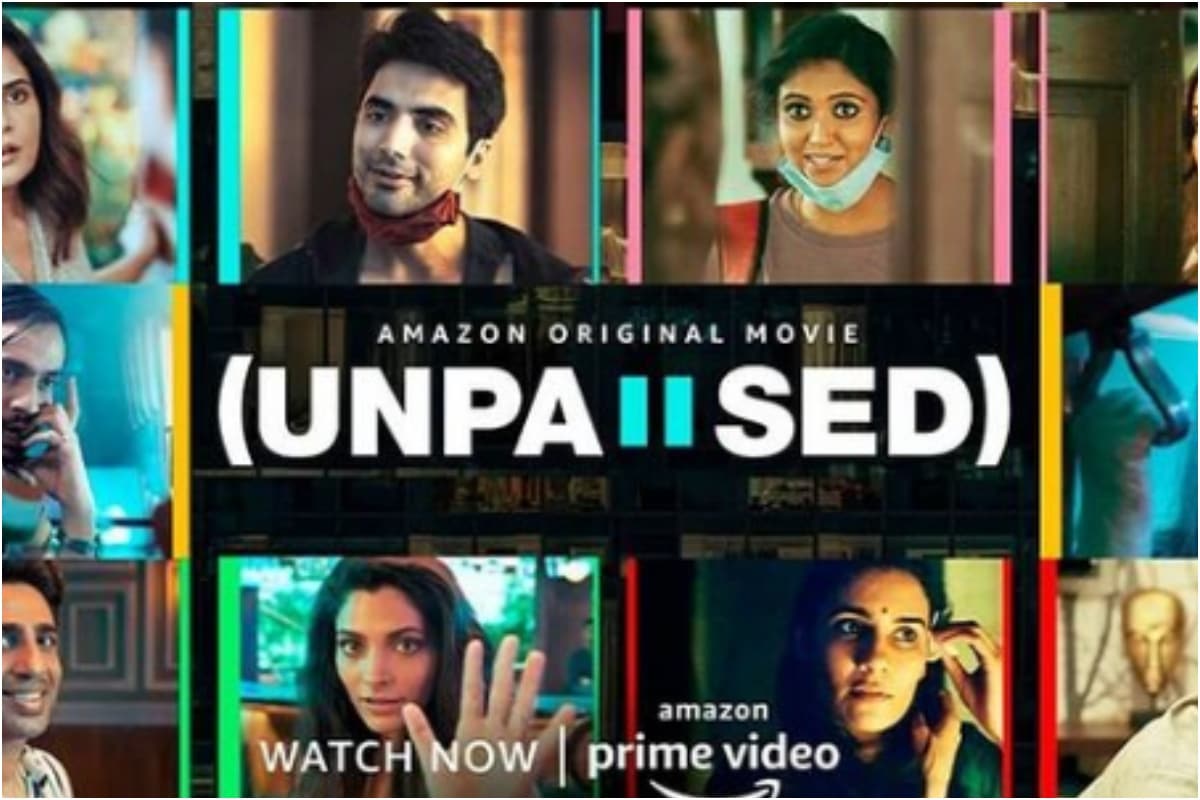 The present pandemic with social isolation, lockdowns and curfews have also had a positive side to it. It has got our imagination flying, and cinema writers and directors have thought up of a variety of ways to tell stories keeping in mind the suffocating constraints. Amazon Prime has really scored here; a little while ago, it put on its platform a Tamil anthology, Putham Pudhu Kalai, of five shorts – each talking about the terrifying times we are passing through. But, these pieces were lighthearted, even funny, and acted as mood boosters!

Now, Amazon Prime has given us another anthology, Unpaused – this time in Hindi with five episodes all about the pandemic months. And they are as wonderful as the Tamil work. Elevating and engrossing.

Glitch by Raj & DK is futuristic, set when Covid 30 strikes the world. Gulshan Devaiah, plays a hypochondriac man who meets a woman (Saiyami Kher) on a blind date, and they end up with a plastic sheet between them and talking to each other in sign language.

In Tannishtha Chatterjee’s Rat-a-Tat, an elderly woman (Lillete Dubey) is irritated when people begin to bang drums and vessels to frighten off the microbes. She is even more pissed when her young neighbour (Rinku Rajguru) rings the bell and says she is mortified of the little rat in her apartment. The woman shoos off the neighbour, but when she finds her the next morning sleeping on the landing, Dubey melts and a beautiful bond begins to build. I liked the way this short ends with the rat scampering out the house! And then…

Another relationship is forged in Chaand Mubarak from Nitya Mehra: this time, a highly unlikely pairing, between a senior citizen (Ratna Shah Pathak) and a young rickshaw driver (Shardul Bharadwaj). One night the woman is lost on a curfew-bound road trying to reach a pharmacy when a cop stops her and admonishes her. People like you are not supposed to be out during these times, he tells her, and hails an autorickshaw to take her to a medical-shop. The woman is paranoid; she keeps sanitising her hands and is in panic when the driver takes a lonely shortcut. But eventually, trust is established when they narrate their stories. He misses his wife and daughters back in his village, and she is devastated after the death of her twin brother. A subtle end highlights how the pandemic has taught us humility and love and caring.

Richa Chadha essays a woman in The Apartment (by Nikkhil Advani), who shocked by the sexual allegations against her magazine editor husband, is all set to hang herself from a ceiling fan in her flat when Ishwak Singh knocks on her door. She gets down from the chair and opens the door to a blabbering do-gooder. He says that water from her flower pot in her balcony is leaking into his apartment. He refuses to go away, and it is only in the end we know what his real intention was. The climax is simply superb.

Director Avinash Arun is more direct in his Vishaanu in which a migrant family of husband (Abhishek Banerjee), wife (Geetika Ohlyan) and child is driven out of their home during the pandemic. They sneak into a posh, empty house where the couple play out their fantasies. She lies in a bathtub, rose petals, and all, dreaming of a life that she saw in a glossy magazine. The man dances with her and video-graphs on his mobile. And then falls the thunder shattering their short-lived magic. This episode reminded me of the Korean work, Bong Joon Ho’s Parasite, which picked up four Oscars. Here too, an impoverished family finds refugee in a palatial bungalow to play out their desires.

Unpaused is gripping. Most of the stories are novel or, more importantly, narrated with singular ease and in a wonderfully different way. Suspicion in times like these eventually give way to trust, and lovely relationships are forged. Pathak’s panic (I will call the police she screams when the autorickshaw driver veers into a lonely road) slows turns into one of confidence and camaraderie. In the end, she gives him a gift, and the man is thrilled. Now, you can see your daughters, she tells him.

Singh plays a different kind hero in The Apartment, does not break open the door, but rings her bell, distracts her from suicidal thoughts and wins over her. Life is for living.

Dubey’s stiffness softens when she sees the neighbouring girl’s helplessness. I am not afraid of lizards and cockroaches, but rats terrify me, she pleads. This turns out to be the beginning of a beautiful bond!