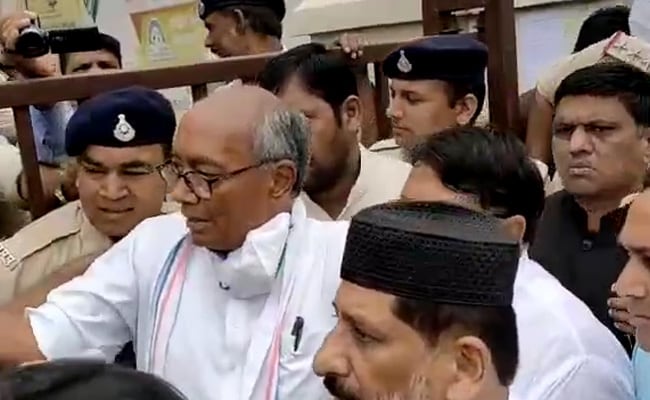 “How is someone who has been a Chief Minister for 10 years doing this?” Shivraj Singh Chouhan said.

There was a ruckus outside the office since morning where several Congress workers and leaders had camped. Some Congress members had switched sides right before the election. As soon as the senior party leadership got the news, former Chief Minister Digvijay Singh, former Union Minister Suresh Pachauri, Congress MLA PC Sharma, and Arif Masood along with hundreds of Congress workers reached the district panchayat office and created a ruckus.

Videos show Mr Singh clashing with cops. In one clip, he even appears to hold the collar of one of the cops stationed there.

Chief Minister Shivraj Singh Chouhan condemned the incident, targeting Mr Singh. “This indecent behaviour doesn’t suit a former Chief Minister. He is grabbing a cop by the collar, screaming, trying to break the gate of the collectorate. This is misbehaviour. Victory and defeat are part of a democratic system, but who gave you the right to grab a policeman by the collar? I am surprised. How is someone who has been a Chief Minister for 10 years doing this? This is an expression of the frustration of the Congress for losing ground,” he said.

The situation had escalated when minister Bhupendra Singh and Huzur MLA Rameshwar Sharma reached the district panchayat office along with party members for the election, but Congress leaders including Digvijay Singh stood in front of the car and did not let the minister’s vehicle inside. Meanwhile, BJP MLA Rameshwar Sharma took a woman member inside the district panchayat office by covering her face.

The election was complete amid this uproar that continued for a long time. The commotion died down after it was announced that the BJP had won.

Ramkunwar Gurjar got 6 votes while Rashmi Bhargava got 4 votes.