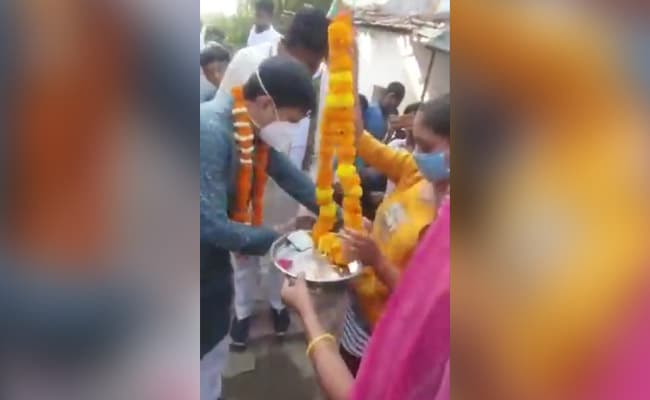 The Congress has accused the BJP of “murdering democracy” by influencing voters in bypoll-bound Madhya Pradesh after visuals of MLA Akash Vijayvargiya allegedly distributing cash to women were shared widely on the internet.

A video shows Indore-3 legislator Vijayvargiya placing Rs-500 currency notes in plates held by women after they greet him. The incident is said to have been capture on camera during Mr Vijayvargiya’s campaigning in a village in Indore’s Sanwer – one of the 28 seats where by-elections will be held next month.

Commenting on the video, Congress legislator from Rau, Jitu Patwari, said, “The BJP has nothing to show for itself. A BJP leader (Akash Vijayvargiya) has been caught distributing cash. Sarees and utensils, among other things, are also being given to people in the name of development. Murdering democracy and mocking the country’s constitution has become routine for them. People are seeing all this and they will teach the BJP a lesson.”

Mr Patwari’s remark of BJP “distributing cash in name of development” comes weeks after the Congress submitted a memorandum before the Election Commission alleging that the BJP was “misusing” state government machinery to influence voters through its “Garib Kalyan Saptah” from September 17-23. A complaint was also lodged before the Madhya Pradesh CEO in this regard.

Recently on Saturday, a police case was also filed against Mr Patwari and Congress candidate from Sanwer, Premchand Borasi ‘Guddu’, and others for violating code of conduct.

Stating that the cases were a smoke screen, Congress’s Mr Borasi said the Election Commission was going easy on violations by the ruling party. “No action has been taken in the bigger cases related to violation of the model code of conduct, such as the seizure of liquor and cash,” he said.

Mr Borasi is pitted against minister Tulsiram Silawat, who joined the BJP from the Congress, in Sanwer.

There has been pitched campaigning on the key Sanwer seat. On Sunday, senior BJP Govind Malu had addressed a gathering here and said the “saint” and the “devil” were in fray. While the BJP is a party of “sadhus” (holy men), opposition Congress was a party of “shaitaan” (the devil), he had said.

Majority of the 28 seats going to polls in Madhya Pradesh on November 3 fell vacant as Jyotiraditya Scindia switched camp from the Congress to the BJP with his loyalists. With Ms Scindia’s support, the BJP displaced Kamal Nath as the Chief Minister and formed government under the leadership of Shivraj Singh Chouhan.