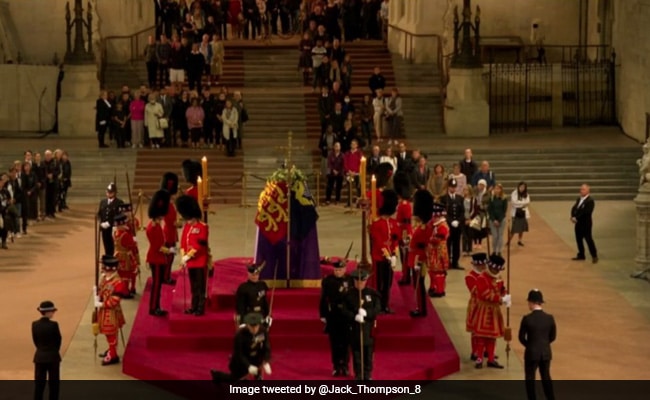 The royal guard was collapsed while holding a vigil next to the Queen’s coffin.

While Queen Elizabeth II was lying in state at Westminster Hall on Wednesday, something bizarre happened. A contingent guard who was standing close to her body collapsed and fell hard to the ground.

The viral video shows the guard, who is dressed in a black uniform, at first appearing to stumble from his position on the catafalque, an elevated platform where the Queen’s coffin is placed.

He sways unsteadily, steps off the platform for a moment, then gets back up and takes his place. The crowd audibly gasps when he abruptly falls forward and lands face-first on the ground a little while later.

Two men ran over to assist him as his cap came off, exposing a head of white hair. As police and others responded, the BBC, which was live-streaming the ceremony, had to interrupt its transmission for a while.

Personnel from the Sovereign’s Bodyguard, the Household Division, or Yeoman Warders of the Tower of London are constantly on duty to protect the Queen’s coffin.

Before the state funeral on Monday (September 19) at Westminster Abbey, the country’s longest-reigning monarch, who passed away on September 8 at the age of 96 after spending 70 years in power, is laid to rest in the capital’s Westminster Hall.

The coffin was taken out of Buckingham Palace for the final time on Wednesday, in front of tens of thousands of people, after more than 48 hours of waiting outside in all weather conditions.

The first full day of Queen Elizabeth II’s lying-in-state is Thursday, giving people one more opportunity to bid goodbye to the beloved monarch who is renowned for her unwavering sense of duty.