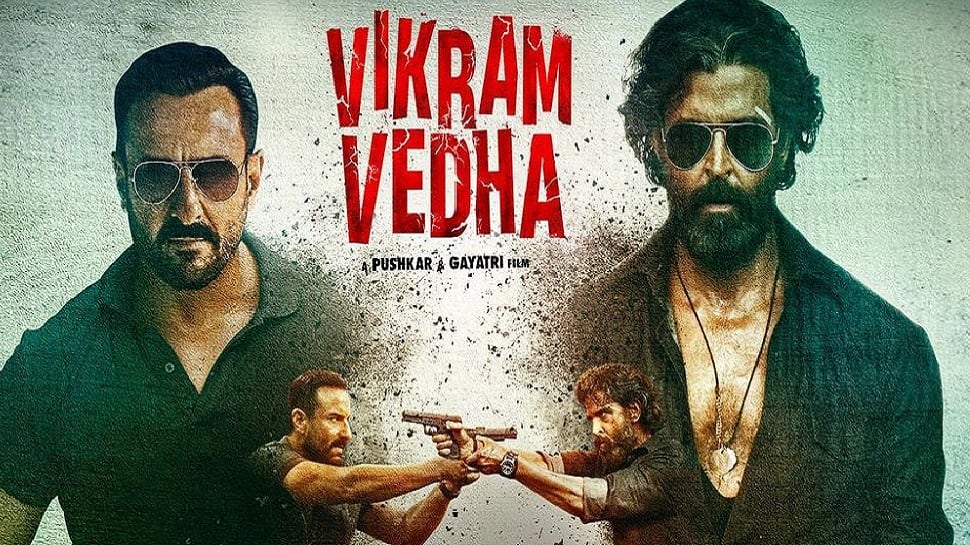 
The first video gives a glimpse of all the action, teamwork and fun that went into bringing Saif Ali Khan as Vikram to life for the big screen. Saif as Vikram is seen in action on the hunt for Vedha, as he struts holding a pistol under the direction of Pushkar & Gayatri. The video also showcases Saif goofing around & immersed in discussions between takes, gearing up to deliver the best version of Vikram.


A separate video highlights the journey of Hrithik Roshan immersed in the process of becoming Vedha. Beginning from BTS shots of working on his look, to showcasing the different shades & quirks of Vedha, Hrithik features in a never seen before avatar. The newly released content piece from the sets of Vikram Vedha delves deep into the action, drama and hard work that went into the making of Vedha.

The makers of Vikram Vedha had earlier treated the audience with an engaging teaser to their film. The teaser received much love & appreciation from the audience and is the Most Liked Hindi Film Teaser ever. Earlier this month, the team of Vikram Vedha also held a first-ever special preview across 10 cities for fans to launch the trailer of their film. The action-packed trailer was complete with thrilling visuals and whistle-worthy moments, raising anticipation for the film’s release.

Vikram Vedha is an action-thriller written & directed by Pushkar-Gayatri. The story of Vikram Vedha is full of twists and turns, as a tough cop Vikram (Saif Ali Khan) sets out to track and chase a dreaded gangster Vedha (Hrithik Roshan). A cat-and-mouse chase unfolds, where Vedha – a master storyteller helps Vikram peel back layers through a series of stories leading to thought-provoking moral ambiguities.


Vikram Vedha is presented by Gulshan Kumar, T-Series and Reliance Entertainment in association with Friday Filmworks & Jio Studios and a YNOT Studios Production. The film is directed by Pushkar & Gayatri and produced by Bhushan Kumar & S. Sashikanth and Reliance Entertainment.  Vikram Vedha will hit the big screens globally on 30th September 2022.