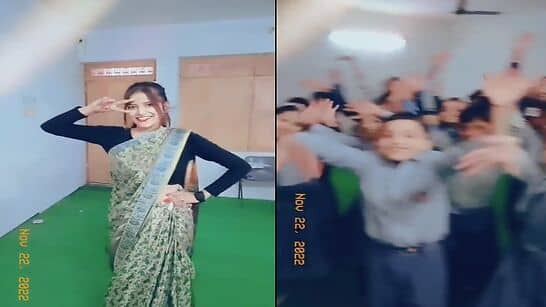 Viral Video: An interesting video is going crazy viral on social media where a school teacher was seen dancing with her students in the class to a Bhojpuri song ‘Patli Kamariya Mor Hai’ the teacher can be seen dancing and then, the camera pans towards the students who start waving at the camera. However, the majority of netizens are upset with it as the teacher is now facing some massive trolling.


The clip shows the teacher dancing to a Bhojpuri song and then, her students also make an appearance. In the video, you can see a teacher dressed in a saree dancing to the Bhojpuri song Patli Kamariya Mori in the classroom. Twitter user ‘Gulzar_sahab’ tweeted the video saying, “Why didn’t we get such a teacher in our childhood?”

The video has received over 268k views and 8,200 likes. Many Twitter users were offended and some even outraged by the video and urged the school to fire or suspend the teacher as this was against the decorum of a classroom.


This woman should be removed from immediate effect… what vulgarity they are spreading and that too involving kids … such shame
— Archana Singh (@archanadhwani) December 2, 2022

This is what the teacher is teaching the students? “Patli kamariya mori”
— Dr Parul Chandra (@DrParulChandra1) December 3, 2022