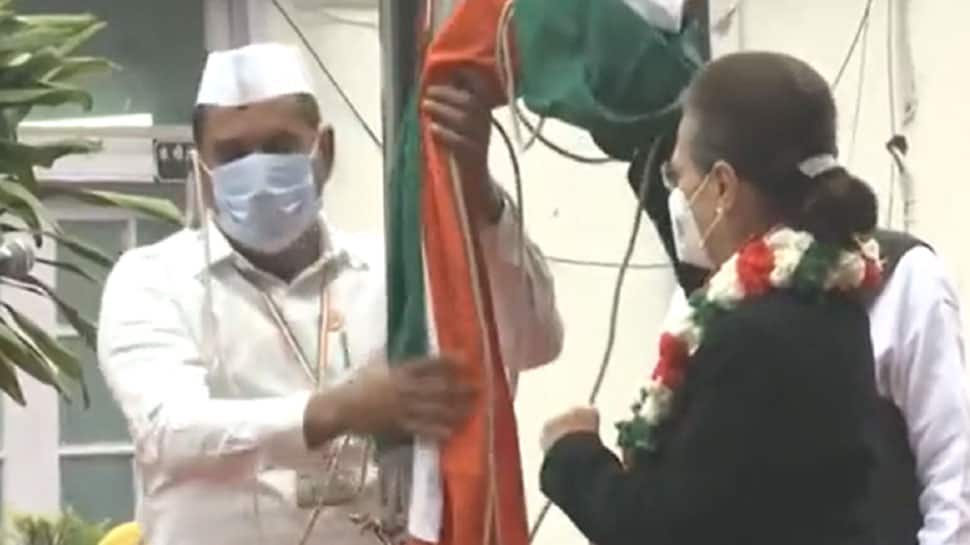 NEW DELHI: The Indian National Congress (INC) is celebrating its 137th foundation day on Tuesday, hoping to get back its lost electoral ground ahead of the 2024 general elections.

The celebrations were officially kicked off by interim president Sonia Gandhi who unfurled the party’s flag in presence of senior leaders. However, as she tried to hoist the party flag, it fell down from the post.

A video showing Sonia Gandhi trying to hoist the party flag and how it eventually fell down was shared by news agency ANI.

Having faced drubbings in the 2014 and 2019 Lok Sabha polls and a series of losses in assembly polls, the past year was also challenging for Congress as it failed to win any election in the states that went to the polls. The party will be emphasising its role as the major opposition force to take on the BJP-led government over several issues of national importance.

The party also faced factionalism in the two major states it rules – Punjab and Chhattisgarh. In Punjab, Capt Amarinder Singh resigned as chief minister amid internal conflict and has now formed its own party to fight the assembly polls in alliance with the BJP.

The Congress is gearing up anew for 2024 and hopes to build momentum by performing well in the coming assembly polls.
The party is also trying to put the BJP-led government on the back foot through country-wide agitations and demonstrations on issues such as price rise.

After its campaign on inflation and a rally in Jaipur, Congress is now planning to raise the issue of unemployment and privatization of government companies. Sources said a nine-member committee led by party veteran Digvijay Singh is preparing the outline of the protest campaigns in these issues. The committee also includes party general secretary Priyanka Gandhi Vadra and leader party Ragini Nayak.

Congress has also started a big training programme with a goal to prepare around 5,500 trainers from state, district and block levels across the country. These trainers will drive the party’s message on the ground through debates and discussions in neighbourhood shops including tea stalls.

In its training programme, the party is also mulling to take help from thinkers and historians and Aditya Mukherjee and Ram Punyani are among those who have been contacted in this regard.

The first such training programme was held in Wardha in November this year where a five-day camp was organized. Congress leader Rahul Gandhi addressed the Wardha camp virtually.  In the coming time, these trainers will expand the cadre of party workers across the country in order to actively raise pubic-related issues and the “failures of the current government at the centre”, party sources said.

Congress is also going to launch a missed call number to connect the people. With the slogan “Jaat par na paat par, button dabega haath par”, Congress is also countering efforts being made by different parties to attract caste groups and is making attempt to link the issue of unemployment and privatization of government companies with reservation.

The party will try to reach out to people to convey that privatization will reduce government jobs and end the benefits of reservation.
Besides, public outreach campaigns, Congress has also conducted bullock cart rallies and tractor yatra to catch the attention of the people and the media.

According to sources, Congress is preparing pamphlets in local languages to propagate the facts related to Veer Savarkar and the efforts by its rivals to talk about perceived tensions between India’s first Home Minister Sardar Vallabhbhai Patel and the country’s first Prime Minister Jawaharlal Nehru.

Congress is also making efforts to increase its vote share by reaching out to various sections including women and unorganised workers. The coming year will also see the party getting a new president at the culmination of its organisational elections.