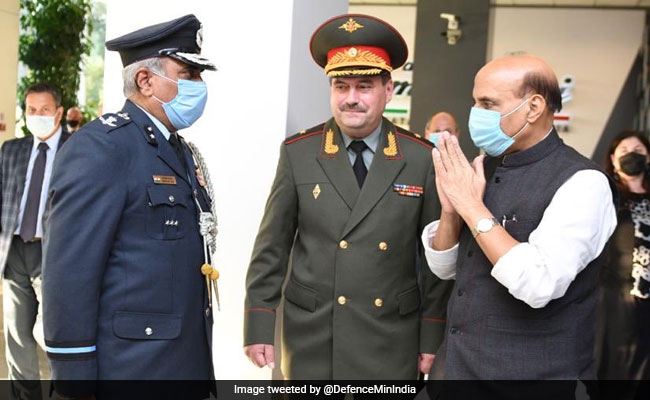 Defence Minister Rajnath Singh, who is in Russia for the crucial Shanghai Cooperation Organisation (SCO) meeting, folded his hands and greeted top Russian officials with the traditional Indian “Namaste” as he landed in Moscow late last night.

“Reached Moscow this evening. Looking forward to my bilateral meeting with the Russian Counterpart General Sergey Shoygu tomorrow,” Mr Singh tweeted, along with a video of him being welcomed by Major General Bukhteev Yury Nikolaevich at the Moscow airport.

The video shows Mr Singh, accompanied by Indian ambassador DB Venkatesh Varma, walking up to the Russian officials. Mr Singh, who was wearing a mask, folded his hands in “Namaste” as the top Russian army officer saluted him and then reciprocated with a “Namaste“, which has become a popular form of greeting among world leaders in the time of the coronavirus pandemic.

The defence ministers of all eight SCO member nations are expected to deliberate on regional security challenges like terrorism and extremism and ways to deal with them collectively here on Friday, officials said.

The meeting is taking place under the shadow of a fierce stand-off between India and China in Ladakh.

This is Rajnath Singh’s second visit to Moscow since June. He had represented India at the Victory Day Parade in Moscow on June 24 that commemorated the 75th anniversary of the Soviet victory over Nazi Germany in the Second World War.

(With inputs from PTI)