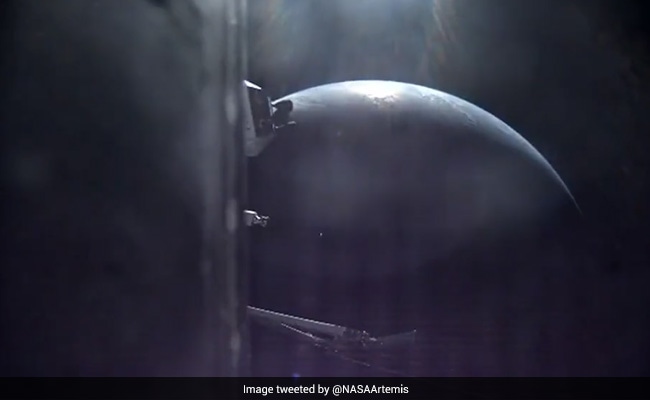 NASA launched the Artemis 1 mission as a test flight before sending people to Moon.

After months of delays, the Artemis 1 mission of American space agency NASA launched successfully from Florida’s Kennedy Space Centre on Wednesday. NASA streamed the event live on its various social media handle and posted short clips on Twitter. One of these videos shows the spectacular image of Earth captured by spaceship Orion fixed to the rocket’s top while on its journey to orbit the Moon. The 32-storey tall Space Launch System (SLS) blasted off at 01:47 am (local time), producing a record 8.8 million pounds of thrust.

Also Read | NASA Launches Artemis 1: Five Points On “The Most Powerful Rocket In The World”

NASA shared to footage of the Earth taken by the spacecraft on Artemis mission’s Twitter handle. “As @NASA_Orion begins the #Artemis I mission to the Moon, the spacecraft captured these stunning views of our home planet,” it said in the tweet text.

As @NASA_Orion begins the #Artemis I mission to the Moon, the spacecraft captured these stunning views of our home planet. pic.twitter.com/Pzk3PDt7sd

The 24-second clip shows the Earth receding behind the rocket moving at more than 22,600 mph (36,370 kmph) to propel the Orion spacecraft on the path to Moon.

“Now we are going back to the Moon, not just for the sake of going to the Moon, but to learn how to live on the Moon in order to prepare to send humans all the way to Mars,” NASA administrator Bill Nelson told a news conference after the launch.

“This is the next beginning, this is the Artemis generation,” Mr Nelson added.

Orion will orbit Earth’s nearest neighbour, in a test run for later flights that should see the first woman and first person of colour touch down on lunar soil.

America last sent astronauts to the Moon during the Apollo era, from 1969-1972.

This time it hopes to build a sustained presence – including a lunar space station – to help prepare for an eventual mission to Mars in the 2030s.