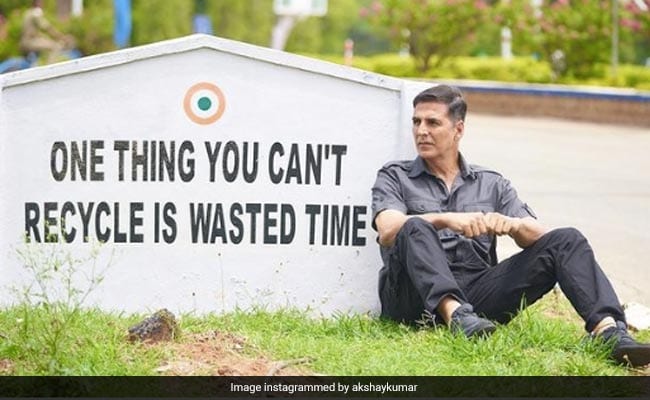 Akshay Kumar, who is celebrating his 55th birthday today, shared a special post on his Instagram handle. On Friday, the actor shared a picture of himself from the sets of his upcoming film – the Hindi remake of Suriya’s 2020 Tamil film Soorarai Pottru. Sharing the picture, Akshay wrote, “Saal guzarta hai, waqt nikalta hai… what remains constant is the gratitude I feel on every birthday. Thank you always for all your love” with a folded hand and heart emoji. In the picture, Akshay, who is in a uniform can be seen sitting next to a wall that read, “One thing you can’t recycle is wasted time.” The actor shared the post on both Instagram and Twitter. His post was flooded with many comments from his fans. Many of them dropped “Happy Birthday” comments, while the others dropped heart and fire emojis.

Akshay Kumar’s wife and former actor Twinkle Khanna too shared a special post for her husband. Sharing a picture of herself with Akshay, Twinkle captioned the post, “The Birthday Boy who wins at every game! Yes, he beat me at Backgammon. Then he annihilated an Oxford chap and a tag team of four players, all against him, in a game of, wait for this, Scrabble! The best part, a friend got him a halwa cake just like the one his mother used to make for him every year on his birthday. Happy Birthday my Scrabble Master.”

Akshay Kumar is working on the Hindi remake of Suriya’s 2020 Tamil film Soorarai Pottru. The Hindi version of the film is being produced by Suriya and his wife and actor Jyothika’s 2D Entertainment. The name of the film is yet to be revealed. However, Suriya has confirmed his cameo in Akshay Kumar’s film.

.@akshaykumar sir to see you as #VIR was nostalgic! @Sudha_Kongara can see our story beautifully coming alive again #Maara! Enjoyed every minute with team #SooraraiPottru Hindi in a brief cameo! @vikramixpic.twitter.com/ZNQNGQO2Fq

Akshay Kumar’s film, Cuttputlli recently released on Disney Plus Hotstar, also stars Rakul Preet Singh. The film is the official Hindi remake of the 2018 Tamil film Ratsasan. Before that the actor’s film Raksha Bandhan, starring Bhump Pednekar released in theaters on August 11 coinciding with the festival.

Akshay Kumar is now waiting for the release of his film Ram Setu, also starring Jacqueline Fernandez and Nushrratt Bharuccha in the lead roles. The film will release on October 24.