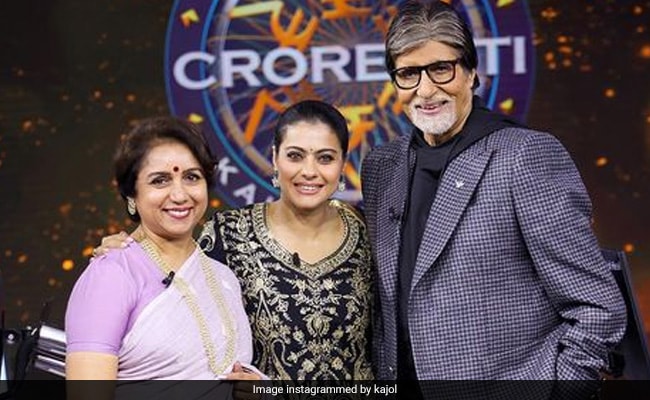 Kajol is back on the big screen with her upcoming project Salaam Venky, directed by actress-filmmaker Revathi. As part of the film’s promotional campaign, Kajol and Revathi visited the sets of Kaun Banega Crorepati, hosted by the iconic Amitabh Bachchan. Kajol has shared several images from the sets of the quiz show, in which Revathi and she are seen on the “hot seat”. In a third and very endearing image, Kajol and Amitabh Bachchan are seen sharing a warm hug. In the caption, Kajol wrote: “Thank you so much for your utter generosity and kindness and letting us bring out the motive of #SalaamVenky to the audiences.  Big ups to the #KBCTeam for pulling this off so well.”

Sony TV, which telecasts KBC, also shared a promo of the episode. The clip shows Kajol answering questions posed by several children. While one asks Kajol if she is a strict mom, another asks Kajol if Tanuja (Kajol’s mother) used to scold her.  A boy also asks  Kajol if she was as scared of Amitabh Bachchan. To this, Kajol replies, “Main bahut darti hu inse (I am very scared of him).” Amitabh Bachchan interjects to say, “Jhooth bolna inko aata hai bahut achi tarah (She knows how to lie very well).” Kajol and Amitabh Bachchan have worked together in Kabhi Khushi Kabhie Gham.

A few weeks ago, Kajol shared the trailer of Salaam Venky. It opens with banter between Sujata (played by Kajol) and her son Venky (played by Vishal Jethwa). Later, the trailer shows that Venky’s health is deteriorating and how the two cope with the truth in different ways. In the caption, she wrote: “Get ready to live life Venky size.”