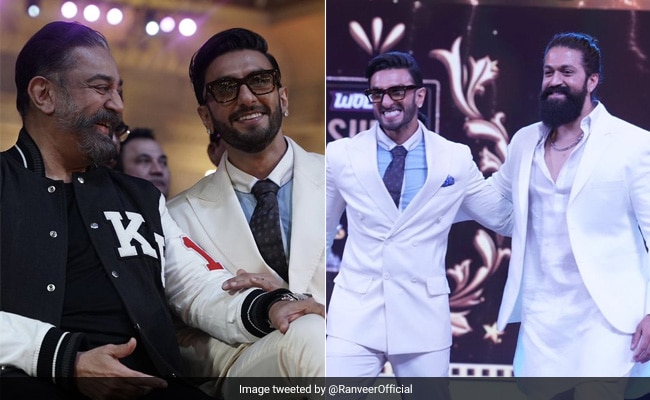 Ranveer Singh, who won the Most Loved Hindi Actor Award at the recently held SIIMA Awards, shared some of his biggest moments from the night on his social media profile. The actor met Kamal Haasan and shared a happy picture from his fanboy moment. There is another shot of Ranveer with KGF star Yash. Both the actors can be seen twinning in white outfits as they pose together. Ranveer also shared the stage with Liger actor Vijay Deverakonda and documented a moment from it on social media. He also shared happy pictured with Allu Arjun, Pooja Hegde and Rana Daggubati from the award show.

A candid picture of Ranveer Singh with Pooja Hegde. The two will co-star in Rohit Shetty’s Cirkus.

The one where Ranveer Singh hugged Allu Arjun.

We can’t help but love this candid picture of Ranveer and Vijay Deverakonda. “Rowdy boys,” Ranveer captioned the post.

Ranveer Singh curated moments from the award ceremony and shared a video from it on Instagram. No caption needed.

Posting a picture with his trophy, Ranveer wrote: “Grateful to the South Indian Film Fraternity for this honour! Thank you for bestowing me with such high esteem.”

In terms of work, Ranveer Singh was last seen in Yash Raj Films’ Jayeshbhai Jordaar. Before that he featured in Kabir Khan’s 83. Last year, the actor also had a cameo appearance in Rohit Shetty’s cop drama Sooryavanshi, starring Akshay Kumar in the lead role. The actor also signed another project with Rohit Shetty, which is titled Cirkus. The film is an adaptation of Shakespeare’s The Comedy Of Errors. He will also star in Karan Johar’s Rocky Aur Rani Ki Prem Kahani.