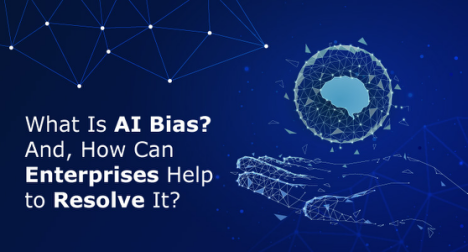 Computers are undoubtedly the most important invention of the 20th century. In the 21st century, humans are making them smarter; we call it Artificial Intelligence. We are building neural networks so that computers can discover patterns and program on their own. We are feeding those data and letting them learn from experience, just like humans do. But, the AI determines the outcomes by algorithms that it creates for itself based on the pattern they recognize from the data we provide. AI, like humans, is subject to bias in its judgments.

So, what is AI Bias?

AI bias may exist due to biases in the training data or prejudiced assumptions taken during the algorithm creation process. And, like human-induced prejudices, the consequences of such biases will harm individuals and enterprises. Let’s look at some examples:

Microsoft launched Tay, an AI-based conversational chatbot, on Twitter in 2016, intending to interact with people through tweets and direct messages. It was a research project that combined machine learning, natural language processing, and social media. Engineers at Microsoft trained Tay’s algorithm on anonymized public data. They designed her to learn more about language with experience, allowing her to have conversations about any topic.

The plan was to release Tay online, then let her discern patterns of language through her interactions, which she would emulate in subsequent conversations. But, it took less than 24 hours for Twitter to corrupt this young AI who just stepped out of her (lab) home into the outside (virtual) world of Twitter.

A group of online trolls led a coordinated attack to introduce racial, political, and gender bias in her. They overwhelmed her with misogynistic, anti-minority, and racist language. She learned from these and started replying with highly offensive and racist messages within a few hours of her release. Even if someone asked her an unbiased question, her (human-like) replies included slurs and offensive language.

What We Learned? We can learn from this incident that designing an AI program that can communicate with people online is more of a social challenge than a technical one. Just like a human child needs nurturing and teaching good values at home before he/she steps out into the cutthroat world, our AI programs need advanced contextual learning before deploying them into the public domain.

Facial recognition technology is also under scrutiny for possible human rights violations it can induce. The Association for Computing Machinery (ACM) in New York City called for a ban on the use of facial recognition technology in the private and public sectors on June 30, 2020, citing that this program has a clear prejudice based on cultural, racial, gender, and other individual traits.

What We Learned? Authorities are planning to implement FR and similar AI applications all over for public security. It’s critical to solve algorithmic bias problems to make these systems just and unprejudiced. AI can help identify and mitigate the impact of human biases, but it can also exacerbate the issue by scaling-up biases in sensitive application areas like facial recognition.

Amazon began an AI initiative in 2014 to automate the recruitment process. The AI’s task was to analyze and rate job applicants’ resumes. The aim was to reduce the amount of time that human recruiters spend manually screening resumes. By 2015, however, Amazon had discovered that their new AI recruitment system was not fairly scoring applicants and biased against women.

Why did it happen? To train their AI model, Amazon used historical data from the previous ten years. Since there was male domination in the tech sector and men made up 60% of Amazon’s workforce, historical statistics contained discrimination against women. As a result, AI’s recruitment algorithm incorrectly assumed that male applicants were preferred. It penalized resumes with the word “women’s” in them, such as “women’s chess club captain.”  Amazon later decided to remove the program from recruiting duties.

What We Learned? AI learns from training datasets that humans introduce to them. These data can reveal biased human decisions and historical or social inequalities existing in human consciousness that can also creep into AI systems. We need to check and remove the historical discrimination based on gender, race, and sexual orientation, so that AI doesn’t become bias like many humans.

The Benefit of Knowing the Existence of AI Bias

Every innovation in history wasn’t a perfect solution from day one of its application. We apply solutions on a pilot basis, observe how it works, correct the errors, make it better, ensure that it is harmless, and deploy it on a large scale. We can resolve the moral problem of AI bias by following the ethical ways of innovation and deployment. Now, we have established that AI biases do exist. It’s helping the society, businesses, and the future of AI, by revealing itself.

AI learns from its masters, the humans. But so far, it has not learned to lie. When a bias exists, it doesn’t deny it. With careful examination, humans can find where and why the bias exists, learn from it, and find ways to resolve it. Furthermore, AI is exposing long-standing human biases that have been either ignored or neglected.

As a result, we will understand more about ourselves from researching AI bias. We should look at it as a passing phase and be constructive about AI bias, only if we can learn from it and work to fix it. We must ensure not to deploy any AI software on a broad scale without these corrections. AI/ML Development Firms can help in it.

How Can Organizations Help in Reducing AI Bias?

If AI is to achieve its full potential and improve people’s confidence in the system, AI/ML companies must work to mitigate its biases. We’ve outlined six approaches for companies to address AI bias below:

The AI Fairness 360 toolkit is an open-source library of strategies created by researchers to help identify and overcome bias in machine learning models throughout the AI development lifecycle. This method, which is available in both R and Python, provides a robust collection of metrics for testing biases in datasets and models.

Companies can use WIT to simulate scenarios and assess the relevance of different data elements. With WIT, you can visualize model behavior across numerous models, input data subsets, and various ML fairness metrics.

Systematic biases in AI programs not only harm marginalized groups but also endangers further progress in AI. Biases reduce AI’s capacity for business and society by instilling mistrust and generating skewed results. Organizations need to encourage scientific and social research that can mitigate biases in AI.

AI has many inherent benefits for businesses, economy, and society. Even so, this will only be feasible if people believe these programs can yield unbiased outcomes. AI can support humans in overcoming prejudices, but only if humans collaborate to combat bias in AI.

Tags: How Can Enterprises Help to Resolve It? What Is AI Bias? And