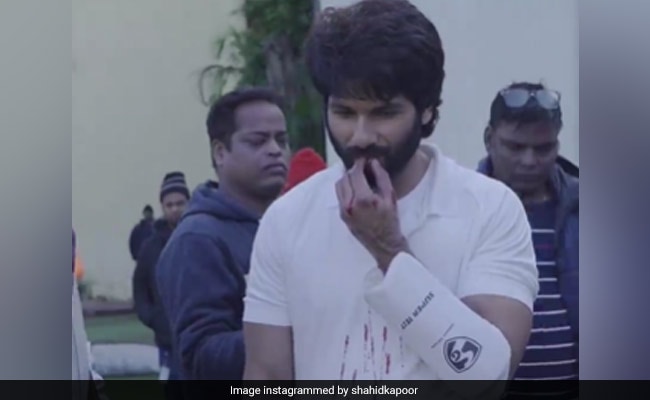 Shahid Kapoor is one of those Bollywood actors who constantly test their boundaries in order to get into their character. The roles Shahid has played over the years has earned him much acclaim from his fans and coworkers. It looks like Shahid is again preparing us for a breathtaking performance in Jersey. The actor has toiled a lot to bring perfection to this film. You can be sure about it once you know that Shahid had to undergo 25 stitches while preparing for this role. Shahid is playing the role of a cricketer, who is trying to get back to the sport after a long hiatus. Now, a recent video uploaded by Shahid reveals details about his injuries too.

We must add that Shahid Kapoor has approached this role with an indomitable spirit. It’s evident when he told his trainer, “Tension nahi hai. Kar lega main. Karate raho. Chhodne ka nahi. [Don”t stress. I’ll pull this off. You keep training me. Don’t stop.]”

Shahid Kapoor wrote in the caption, “This one has my blood.”

Shahid Kapoor received a lot of praise for his strenuous efforts in bringing this character to life. His wife Mira Kapoor commented on his post with an assertive “Yes” with raised hand emoji. Shahid’s brother, actor Ishaan Khatter wrote, “Guts and glory. The stuff of mavericks. Proud of you, bhai.” Producer Aman Gill dropped emojis of a muscular arm, a drop of blood and a red heart in the comments.

Shahid Kapoor also added a bit of humour into his BTS posts. Earlier, he posted about his experience of working with his father Pankaj Kapur. The actor called his father “Papa coach” and wrote, “Papa ke saath kaam karna mushkil hi nahi, scary hai [Working with dad is not only difficult but also scary].”

Jersey, which is the Hindi remake of a Telugu film by the same name, is scheduled to be released on December 31.