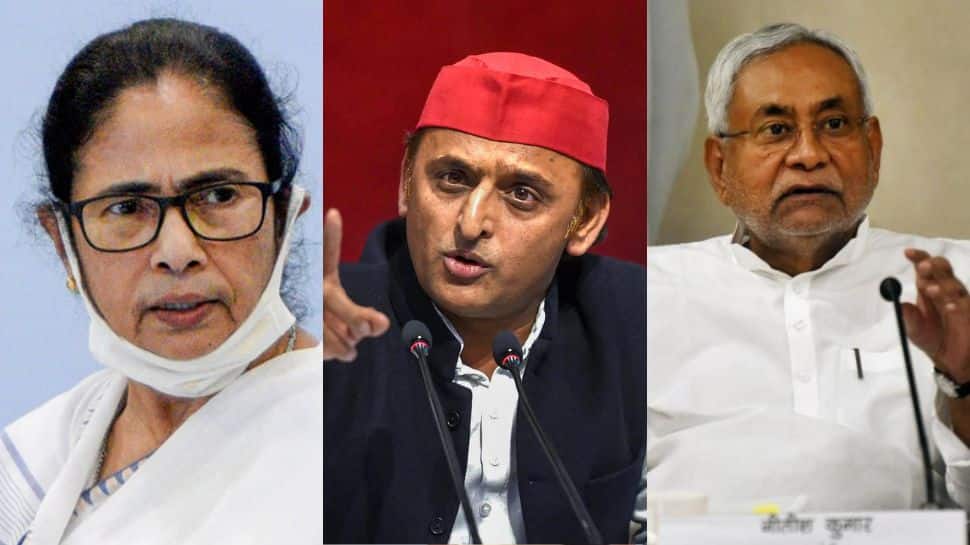 New Delhi: The opposition is making all the efforts of presenting an united front against the Centre to stop Prime Minister Narendra Modi from winning the top post again in 2024 elections, but the recent developments hint otherwise.

Eyeing Lok Sabha polls in 2024, Trinamool Congress MP Saugata Roy said that in the days ahead his party will talk to others in the Opposition to make West Bengal Chief Minister Mamata Banerjee a joint prime ministerial candidate, according to the reports. “Mamata Banerjee is leading in this. She is backed by this huge state,” Roy said, He also added that the TMC supremo has a good image in the country.


But on the other hand, many believe that Bihar CM Nitish Kumar can also be a choice and even, Kumar revealed that he has been getting “a lot of phone calls” of late. However, Nitish Kumar brushed aside rumours that he may now eye the Prime Ministerial race in the next Lok Sabha polls. “I say this with folded hands, I have no such thoughts…My work is to work for everyone. I will make an effort to see that all the Opposition parties work together. If they do, it will be good,” he said.


After Nitish and Mamata, a third name has surfaced for the opposition’s PM candidate and its none other than, leader of opposition in Uttar Pradesh and Samajwadi Party chief, Akhilesh Yadav.


In a TV interview, Samajwadi Party supremo deferred the question of Nitish Kumar’s candidature for the post of PM in the 2024 Lok Sabha elections. During the interview, Yadav was asked his opinion on Sharad Pawar’s statement that Nitish Kumar can be the prime ministerial candidate in the year 2024. To this the SP chief replied saying, ‘I don’t do such big politics. But in 2024 the country will definitely get a face. But who will that face be, I do not know. The face will definitely be found. The SP chief also said that if the BJP can be stopped, it can primarily be done from UP.’

It is clear from his statement that he will not support Nitish Kumar and Mamta Banerjee as PM candidates.


However, no name has been decided by the opposition as the PM candidate for the year 2024. It will be interesting to see if the opposition will finalises the name by mutual consent or not.