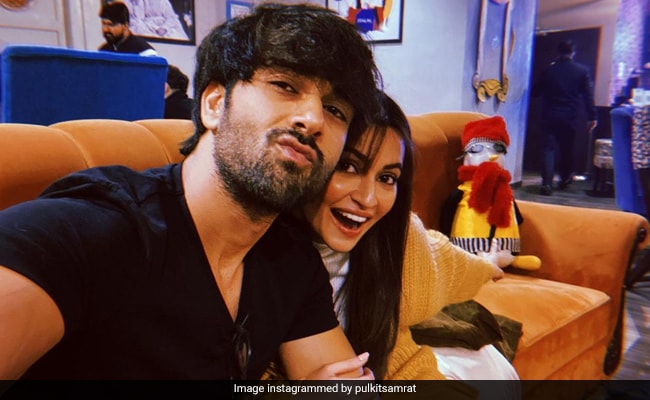 Pulkit Samrat’s recent entry on Instagram will give you major couple goals. The actor, who recently visited a popular American sitcom F.R.I.E.N.D.S-themed cafe with girlfriend, actress Kriti Kharbanda, shared a picture from his outing and accompanied it with a special note for Kriti. Comparing himself and the actress with two of the main characters Ross Geller and Rachel Green, he wrote: “Not sure if am anything like Ross but this hottie is definitely a lot like Rachel! Self made, strong, goofy, funny, stylish, clumsy and hot.” BTW, you can also see Joey Tribbiani’s bedtime penguin pal Hugsy “photobombing” the couple in the post.

Now, if you think Pulkit Samrat’s post is enough to make you go aww, wait till you read Kriti’s comment on it. The actress commented this for her boyfriend: “Winning me over, time and again” with a red heart emoji.

Pulkit Samrat and Kriti Kharbanda, co-stars of films like Veerey Ki Wedding, Pagalpanti and Taish, began dating last year. The actress confirmed their relationship in November last year, when she told ETimes in an exclusive interview: “I’m in a very happy place and I have no qualms admitting that I am dating Pulkit Samra.”

After months, when the nationwide lockdown was imposed, Pulkit Samrat and Kriti Kharbanda lived together in Mumbai and kept themselves busy with date nights, grooming sessions, movie nights and swimming.

Kriti Kharbanda is best-known for her performances in films like Housefull 4, Super Ranga and Shaadi Mein Zaroor Aana. Pulkit Samrat will next be seen in Haathi Mere Saathi, which features Baahubali actor Rana Daggubati in the lead role.