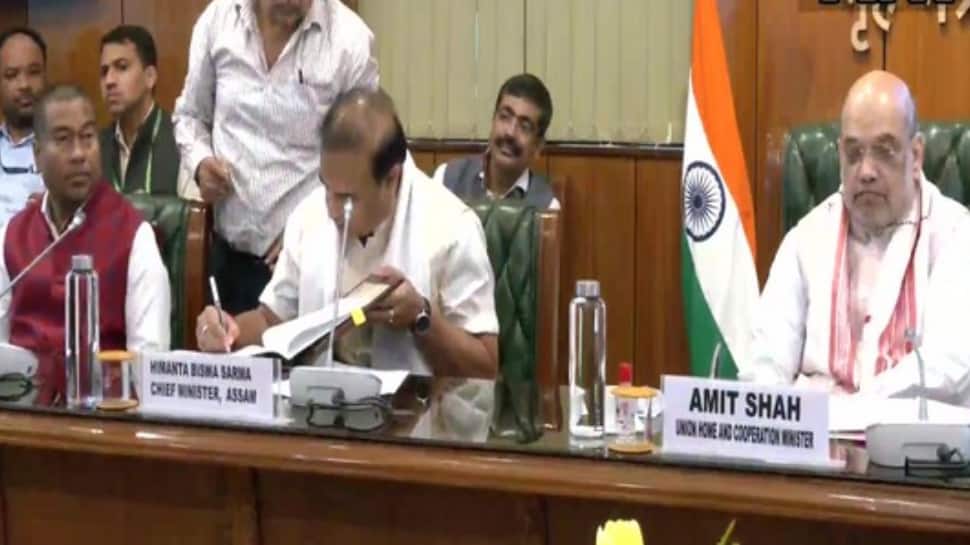 New Delhi: Union Home Minister Amit Shah on Thursday lauded the tripartite peace accord signed between the Centre and Assam governments with eight tribal outfits of state and said more than 1100 persons of the Adivasi outfits are surrendering arms and joining the mainstream today. Speaking after the accord was signed, the Home Minister said the Centre is working towards ending all border disputes in the northeast by 2024.


He said that the Narendra Modi government has taken several initiatives for peace and prosperity of the North East Region (NER). “The biggest programme was to establish peace. In this, we are today crossing a big milestone and moving ahead. Around 1100 persons of Adivasi outfits of Assam are surrendering arms and joining the mainstream today,” he said.


Another milestone towards PM @narendramodi Ji’s vision of a peaceful North East.

A historic agreement between GoI, Govt of Assam and representatives of eight Adivasi groups was signed today in New Delhi to end the decades-old crisis of Adivasis and tea garden workers in Assam. pic.twitter.com/2xW4Siywu7
— Amit Shah (@AmitShah) September 15, 2022

The minister said that the government is working on the conservation and development of the culture of Assam and the northeast, ending disputes, signing agreements with armed groups and rehabilitating them and boosting development in the northeast as in other parts of the country.


“We have signed several agreements in the past three years. We have decided that before 2024, be it the inter-state border disputes, be it, rebel groups, we want to end all the disputes,” he said.

“We want Assam and the North East region should be drug-free, terrorism-free, dispute-free and fully developed. Modi government is working towards this,” he added. The eight rebel groups which are part of the tripartite peace accord include Birsa Commando Force (BCF), Adivasi People`s Army (APA), All Adivasi National Liberation Army (AANLA), Adivasi Cobra Military of Assam (ACMA) and Santhali Tiger Force (STF) and the remaining three outfits are splinter groups of BCF, AANLA and ACMA.


Assam Chief Minister Himanta Biswa Sarma was also present during the signing of the agreement. He had earlier held a meeting with rebel Adivasi groups regarding the final settlement which is currently under a ceasefire. The accord was signed 10 years after the peace process started.


Birsa Commando Force (BCF), Adivasi People`s Army (APA), All Adivasi National Liberation Army (AANLA), Adivasi Cobra Military of Assam (ACMA) and Santhali Tiger Force (STF) have been in a ceasefire with the government since 2012 and since then the cadres of the militant outfits are staying in designated camps.

On January 27 this year, a total of 246 insurgents of two militant groups of the state laid down their arms and returned to the mainstream. In an arms-laying ceremonial function held at Srimanta Sankardev Kalakshetra in Guwahati, 169 insurgents of the United Gorkha People`s Organisation (UGPO) and 77 insurgents of the Tiwa Liberation Army (TLA) laid down their arms before Assam Chief Minister Himanta Biswa Sarma, Assam DGP Bhaskar Jyoti Mahanta, Chief Executive Member of BTR Pramod Boro, CEM TAC Jibon Chandra Konwar.


Amit Shah in January 2020 also presided over the signing of a historic agreement between the Government of India, the Government of Assam and Bodo representatives in New Delhi to end the over 50-year-old Bodo crisis that has cost the region over 4,000 lives.