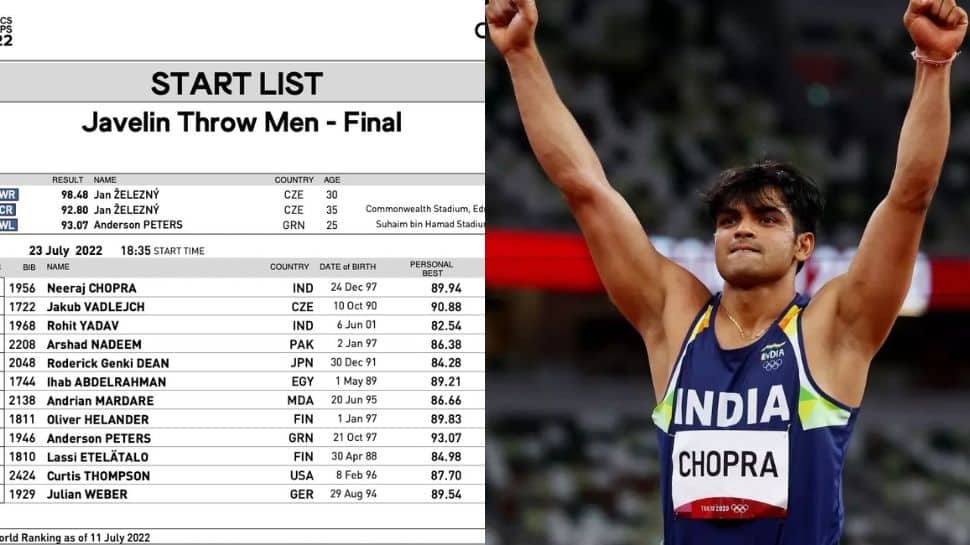 As India’s ace javelin thrower and Tokyo 2020 gold medallist Neeraj Chopra aims to make history in the World Athletics Championships in Eugene, US, on Sunday, the 24-year-old will also be looking to corner glory at the Birmingham Commonwealth Games, which will commence less than a week after the global event. The final will be played on July 24  at 7:05 IST. Neeraj will kick start the final while Rohit Yadav will go third. Pakistan’s Arshad Nadeem will be fourth.

A gold medal at the World Championships will be historic for the country, much like the champion thrower’s top-podium finish at the 2020 Olympic Games in Tokyo. Chopra will also be more than keen to corner glory in Birmingham, given that the 2018 edition of the Games in Gold Coast virtually confirmed his status as the future of India in track and field.


Before making his debut at the CWG in 2018, the Panipat native was already a junior world champion and had begun to make a name for himself in the senior circuit. His knack of making history was on full display at Gold Coast where he hurled the spear to 86.47 metres, just one centimetre short of then-personal best, to win gold.


While his goal certainly would be to win the elusive title at the World Championships on Monday and aim to become the first Indian male athlete to clinch a medal at the biggest athletics event on earth, Chopra would be equally keen to retain the CWG title in Birmingham, given the Games’ historic significance and the fact that multi-discipline events generate a massive wave of interest in the country.

The stars are shining for the champion athlete as he continues to bag one medal after the other in international competitions and shattering national records with impunity.


A recent social media post from Chopra that he always goes for gold is enough indication that he is motivated enough for the Worlds and the CWG alike, even though only 12 days separate the two events.