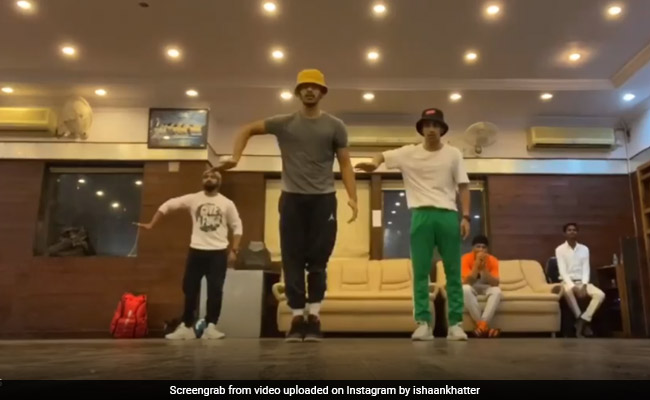 Ishaan Khatter in a still from the video. (courtesy: ishaankhatter)

Ishaan Khatter’s love for dance needs no introduction. On Tuesday, the actor shared a video from the rehearsal session of the song Beyonce Sharma Jayegi from his upcoming film Khaali Peeli. BTW, did you know that Ishaan Khatter prepared for the song in merely 24 hours. Sharing a video from the rehearsal session on his Instagram profile, the actor wrote in his caption: “Had one day to rehearse this one… Pulled it off by the thread of a needle. #KhaaliPeeli.” In the comments section of the post, Ayushmann Khurrana dropped a few clap emojis. Ishaan’s father Rajesh Khattar wrote: “Ye hui na baat.”

Speaking of the song Beyonce Sharma Jayegi from Khaali Peeli, which released on Monday, it is trending big time. The track, also featuring the film’s lead actress Ananya Panday, has been sung by Nakash Aziz and Neeti Mohan. It has been composed by Vishal and Shekhar and the lyrics are by Kumaar and Raj Shekhar. Check out the song here:

Khaali Peeli showcases the journey of a taxi driver (Ishaan) who is released from jail after serving time for “committing a half murder” and a dancer (Ananya Panday), who runs away after stealing some money, They meet in Blackie’s taxi. The film will release on October 2 on streaming platform ZeePlex. Maqbool Khan has directed the film.

Ishaan Khatter, who stepped into the film industry with Beyond The Clouds, starred in the 2018 film Dhadak, opposite Janhvi Kapoor. He was also a part of Mira Nair’s A Suitable Boy. The actor has also signed Phone Bhoot, alongside Katrina Kaif and Gully Boy actor Siddhant Chaturvedi.